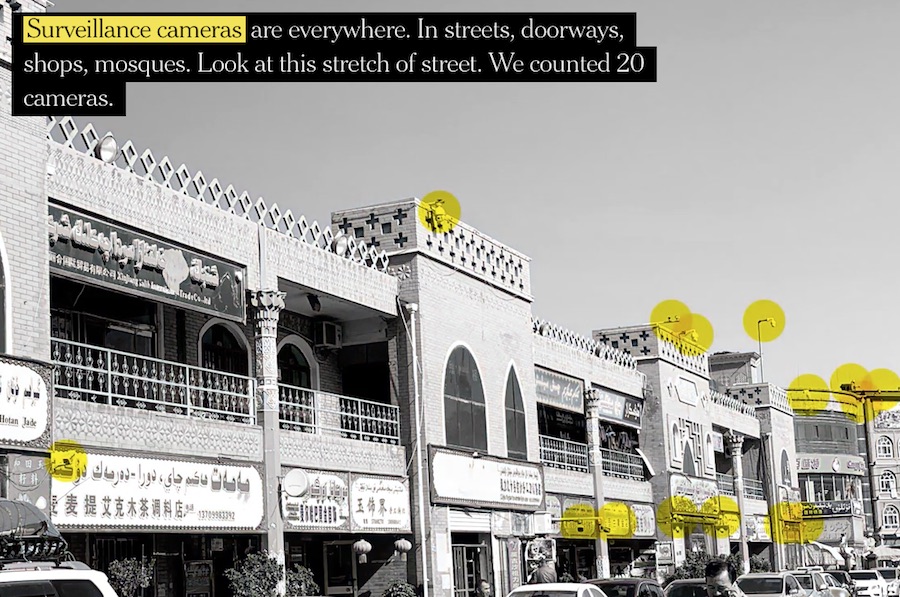 Above from How China Turned a City Into a Prison (NYT, Apr 4)

Remember: what happens to Chinese Uighurs is what will happen to you, if we don't oppose Google, Facebook, Amazon, and other surveillance capitalists. There are no term limits for Zuckerberg, and no elections for Brin, Page, or Bezos.

• How China Turned a City Into a Prison (New York Times, April 4, 2019, by Chris Buckley, Paul Mozur, and Austin Ramzy, reporting from Kashgar, Xinjiang region, China): "The police sometimes take Uighurs' phones and check to make sure they have installed compulsory software that monitors calls and messages."

• One Month, 500,000 Face Scans: How China Is Using A.I. to Profile a Minority (New York Times, April 14, 2019, by Paul Mozur): "The Chinese A.I. companies behind the software include Yitu, Megvii, SenseTime, and CloudWalk, which are each valued at more than $1 billion. ... Fidelity International and Qualcomm Ventures were a part of a consortium that invested $620 million in SenseTime. Sequoia invested in Yitu."

• Being Tracked While Reporting in China, Where ‘There Are No Whys’ (New York Times, April 16, 2019, by Paul Mozur): "I was in Kashgar to report on how the Chinese authorities had turned to technology to cement their control of the Xinjiang territory ... my followers were by turns menacing and buffoonish. There were seven of them, and they took down the information of anyone I spoke to, making it too dangerous to interview residents. The police stopped me many times a day at checkpoints, demanding to look through my phone and often deleting photos and videos."

• Limiting Your Digital Footprints in a Surveillance State (New York Times, Feb 27, 2019, featuring Paul Mozur): "China is wired with about 200 million surveillance cameras, Beijing controls the telecom companies, and every internet company has to hand over data when the police want it. They also know where journalists live because we register our address with police. In Shanghai, the police regularly come to my apartment; once they demanded to come inside."

• Looking Through the Eyes of China’s Surveillance State (New York Times, July 16, 2018, by Paul Mozur): At a policeman's invitation, Mozur puts on surveillance glasses, looking "through a view finder like one on an old video camera. First I was instructed to aim it at a female officer. A small rectangle appeared around her head, and after a few seconds, the screen displayed her name and national identification number." ... "The abilities and intentions of the authorities here are rarely clear, and uncertainty is part of the point. China’s surveillance state is far from perfect, but if people don’t know where it excels and where it breaks down, there’s a better chance they’ll assume it’s working and behave."

• China Appears to Block Microsoft’s Bing as Censorship Intensifies (New York Times, Jan 23, 2019, by Paul Mozur and Karen Weise): Microsoft's Bing search engine has been blocked in China, "even though the American company already censors its results in China." Mark's note: Pity Microsoft, trying their best to accommodate Chinese censors by removing from Bing any mention of democratic impulses in China - and still they don't get credit! They'll have to take their surveillance-manipulation tools and just apply them on Americans.

• We Built a (Legal) Facial Recognition Machine for $60 (New York Times, April 16, 2019, by Sahil Chinoy): "But the city’s LinkNYC kiosks, which are scattered through the streets and intended to provide free wireless internet, each have two security cameras. Law enforcement agencies need a subpoena or court order to gain access to the footage, and using facial recognition is against the policy of the company that owns the kiosks. However, the existence of more than 3,000 additional cameras has raised concerns about their potential to bolster the city’s surveillance capabilities." Mark's note: Excellent story, but would suggest one clarification: the "company that owns the kiosks" is Google/Alphabet, and it certainly has no problems with facial recognition.

• Someone Smashed The Hell Out Of Dozens Of LinkNYC Kiosks (Gothamist, Apr 22): "at least 30 LinkNYC kiosks in the West Village and Chelsea" have been smashed.

• Techtonic from November 5, 2018 - featuring Ava Kofman, talking about Google's LinkNYC surveillance kiosks. Jump to interview or read her article on LinkNYC in the Intercept. 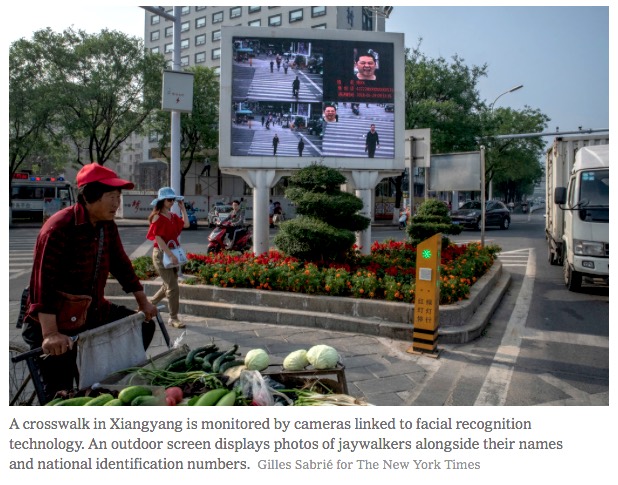 Above, from Looking Through the Eyes of China’s Surveillance State


• The Messy Truth About Social Credit (Shazeda Ahmed in Logic magazine, April 2019): American media depictions of China's social credit system "are wildly off-base... the [Chinese] social credit system as it currently exists is not aimed at Orwellian social control... the government is itself unsure, and is still in the process of figuring out, what such a system can accomplish." Hmm... Ahmed goes on to describe the blacklists of social credit: "Punishments for landing on certain blacklists include being barred from taking civil service jobs, from sending one’s children to private schools, and from booking air travel." Finally, Ahmed points out (correctly) that American data brokers have created some of the same methods of control here in the US. (See Frank Pasquale on Techtonic from November 2018.)

On the Easter bombings in Sri Lanka:

• Sri Lanka Shut Down Social Media. My First Thought Was ‘Good.’ (Kara Swisher in the NYT, Apr 22): "This is the ugly conundrum of the digital age: When you traffic in outrage, you get death." But Swisher concludes that "Shutting social media down in times of crisis isn’t going to work," since it's "too late."

• It’s U.S. vs. World as Big Tech Faces Specter of Limiting Speech Online (NYT, Apr 21): "'For the first time, I’m seeing the left and right agree that something has gotten out of control, and there is a lot of consensus on the harms created by fake news, terrorist content and election interference,' said Nicole Wong, deputy chief technology officer for the Obama administration." Also discusses Section 230 of the Communications Decency Act, "Protection for private blocking and screening of offensive material." 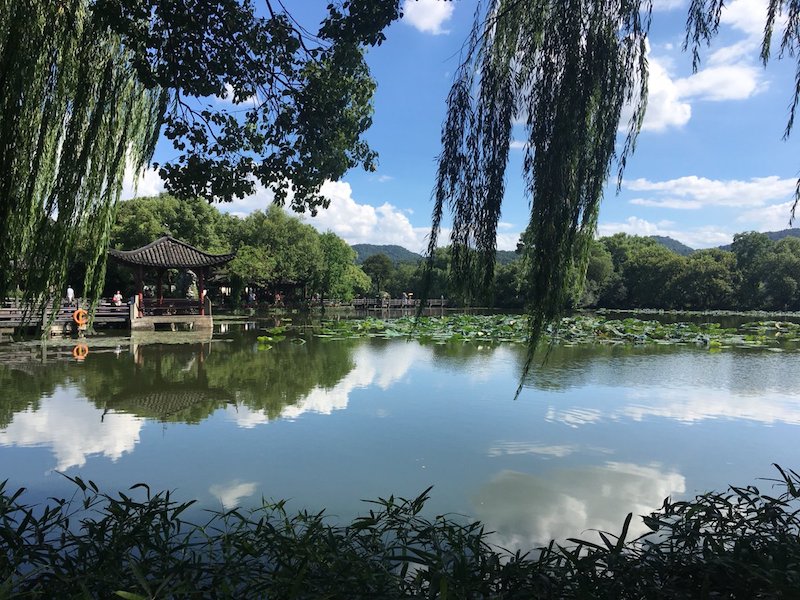 Above, Hangzhou's West Lake. From my trip to China last summer. -mark