This week: Problems with Juul (and scooters and Tik Tok) 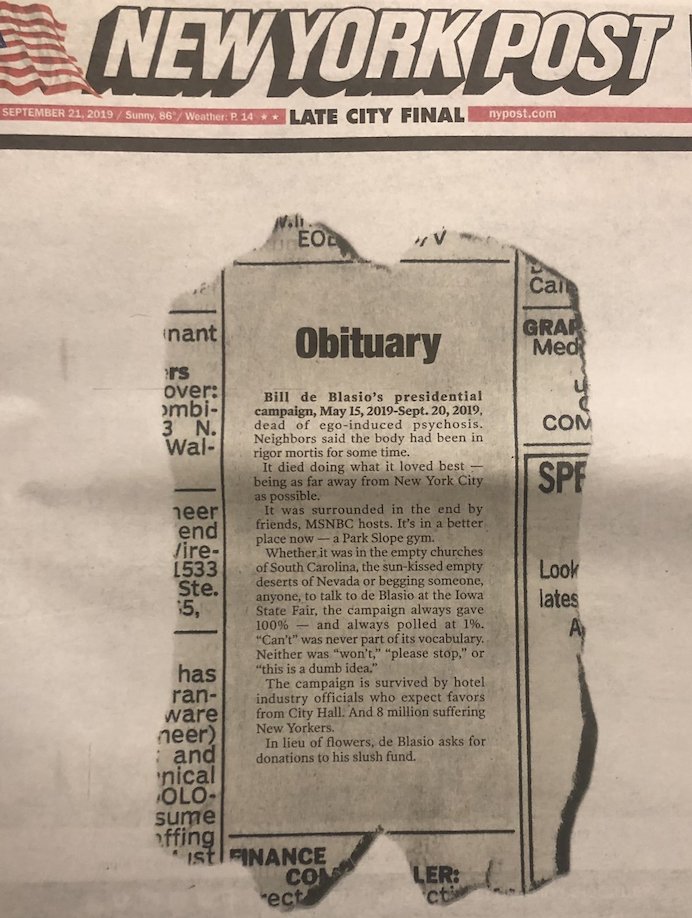 • On the JUUL hearings: Juul Funded High Schools, Recruited Social Media Influencers To Reach Youth, House Panel Charges (Forbes, July 25): "Throughout the hearing, Monsees and Gould maintained that Juul never targeted youth and attempted to distance the company from the tobacco industry. 'Put simply, Juul Labs isn't Big Tobacco,' said Monsees, who is also chief product officer. Monsees, alongside cofounder Adam Bowen, became a billionaire in December after tobacco giant Altria acquired a 35% stake in the company to bump its valuation to $38 billion. Forbes estimates his net worth to be $1.1 billion."

• JUUL targeted schools, downplayed the health impacts and encouraged students to use their products. Meredith Berkman, co-founder of Parents Against Vaping E-cigarettes, testified with two young people that JUUL repeatedly called their product “totally safe,” demonstrated how the product worked, and recommended that a nicotine- addicted student use JUUL during a presentation to their 9th grade class, without teachers or parents present.

• Rae O’Leary, of the Cheyenne River Sioux Tribe, testified that JUUL targeted Native American tribes to use as “guinea pigs.” In exchange for a $600,000 investment, JUUL solicited tribal medical professionals to provide their devices to tribal members for free and collect information on the tribal members. 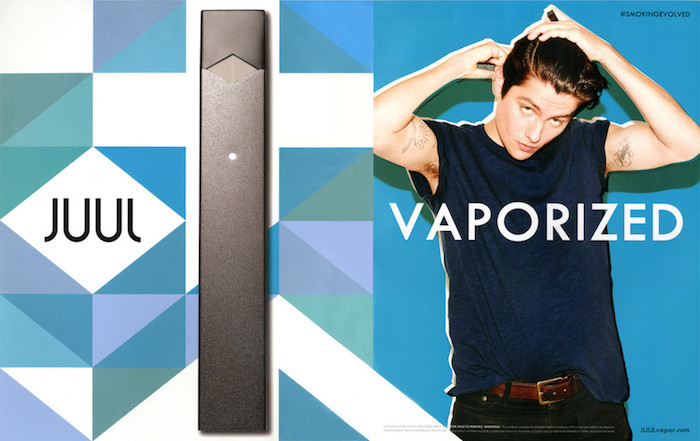 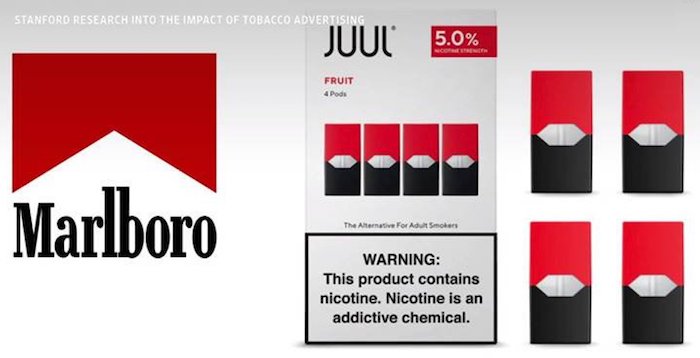 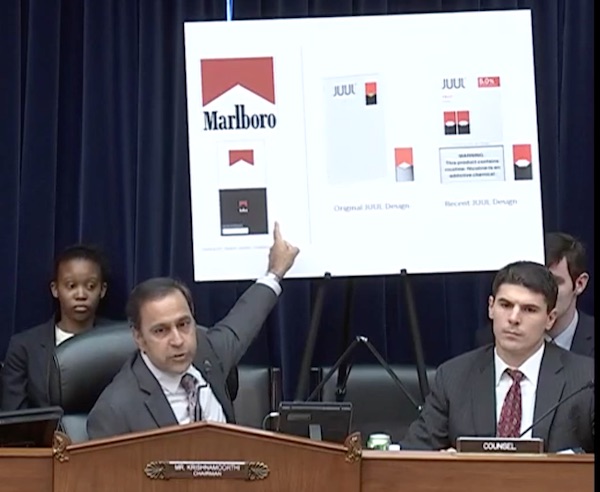 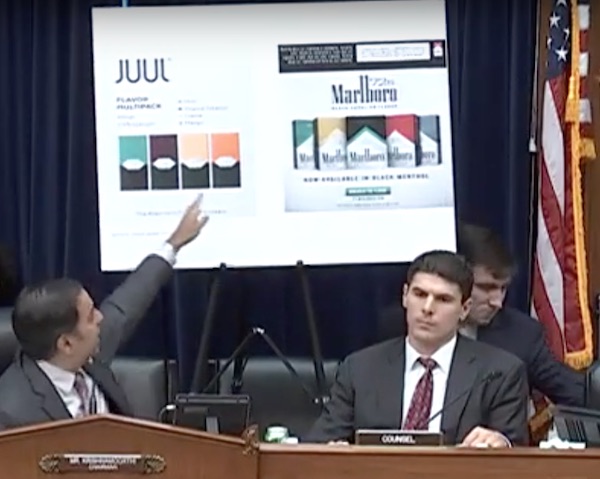 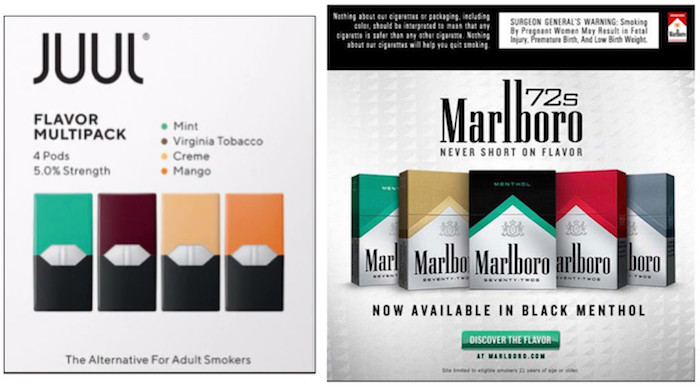 Juul in the news:

• The Promise of Vaping and the Rise of Juul, by Jia Tolentino (New Yorker, May 7, 2018): "Juuls caught on at her [high] school last summer, she [16-year-old] said. Upperclassmen bought them, underclassmen tried them at parties, and suddenly people were Juuling in the cafeteria, charging Juuls on their laptops, and filling their Instagram and Snapchat feeds with Juuling videos and gifs." Dr. Jonathan Winickoff, a pediatrician at Mass General, tells Tolentino: "If you were to design your ideal nicotine-delivery device to addict large numbers of United States kids, you’d invent Juul. It's absolutely unconscionable. The earlier these companies introduce the product to the developing brain, the better the chance they have a lifelong user."

• The Disturbing Focus Of Juul's Early Marketing Campaigns (Forbes, Nov 16, 2018): "While Juul acknowledges that some youth (below the age of 18 or 21, depending on the state) use its products, the company has been emphatic that in its three years on the market, the company has never marketed to underage consumers. But a physician and professor at Stanford University who studies tobacco advertising is crying foul. Dr. Robert Jackler, the cofounder of a group called Stanford Research Into the Impact of Tobacco Advertising (SRITA), a Stanford University-affiliated program, says that Juul deleted the vast majority of its social media posts in several waves sometime before September [2018]."

• Teen Vaping Didn’t Cool Juul’s Celebrity Push (WSJ, Sept 28): "In May 2018, a month after the FDA launched its probe, Juul created a VIP portal for celebrities on its website, offering codes that let celebrities order vaporizers and refill packs for $1 apiece. Thousands of dollars of essentially free merchandise was sent to stars such as Leonardo DiCaprio and model Bella Hadid."

• New Altria Deal Makes Juul Cofounders Billionaires (Forbes, Dec 20, 2018): "Juul Labs’ cofounders, James Monsees and Adam Bowen’s fortunes are set to rise from an estimated $730 million to more than $1.1 billion a piece on news that Altria is taking a 35% stake in Juul Labs at a $38 billion valuation. Bowen is Juul’s chief technology officer and Monsees is chief product officer." That's a long way from James Monsees' 2013 TEDxBrussels talk, a mostly incoherent ramble about stigma, consumer desire, and his enduring apprecation of Stanford's "d.school" and its practice of "design thinking," which he says is "purely just empathy." That's right, Juul was created from empathy!

• 1 in 4 Youths Has Vaped. Will State Bans Do Anything? (NYT, Sept 17): "Studies show that young people’s use of e-cigarettes has escalated in recent years, with more than one in four youths between the ages of 12 and 17 saying that they recently used an e-cigarette."

• At School, ‘Everyone Vapes,’ and Adults Are in Crisis Mode (NYT, Sept 20): "At least 530 people have been sickened by mysterious lung illnesses related to using e-cigarettes with nicotine or vaping THC, the psychoactive ingredient in marijuana, and at least eight have died. That has sent high schools, the epicenters of youth vaping, racing to give teenagers a new, urgent message: Vaping can be deadly. ... [At a vaping-prevention program at her school,] one student openly laughed when she heard a widely cited statistic from the 2019 National Youth Tobacco Survey that estimated that one in four youths between the ages of 12 and 17 have tried vaping nicotine or THC at least once. 'Yeah, that's too low,' she said. 'Literally everyone vapes.'" ... see also The Mysterious Vaping Illness That’s ‘Becoming an Epidemic’ (NYT, Aug 30)

• Vaping’s other problem: are e-cigarettes creating a recycling disaster? (Guardian, Aug 27): "An estimated 55 million adults will be vaping by 2021, creating millions of devices that will be disposed of improperly." ... A recent "study at 12 San Francisco Bay area high schools found JUUL or JUUL-compatible product waste in the parking lots of 10 out of 12 schools, collecting 172 waste items mainly from mango, mint, and cucumber flavored capsules strewn about the ground."

• Juul Tried to Position Itself As a Responsible Actor. It Backfired. (WSJ, Sept 22): "Juul last year developed an anti-vaping program to be presented in elementary and high schools. But an executive inside Juul and public health experts raised concerns that the program was 'eerily similar' to youth- prevention tactics used by R.J. Reynolds and Philip Morris in the 1980s and 1990s ... In August, the FDA received a new set of data. While cigarette smoking had dropped among teens, nearly 28% of high school students said they had used an e-cigarette at least once in the past 30 days, up from 21% a year earlier. The figures also showed a jump in teen use of mint- and menthol- flavored e-cigarettes."

• Federal Prosecutors Conducting Criminal Probe of Juul (WSJ, Sept 23): "Juul has said that its use of paid influencers was short-lived and that it never targeted underage users."

• Scooters: Electric scooters are now disrupting wrists, elbows and heads (CNet, Nov 28, 2018): "Injured scooter riders are flooding US emergency rooms. Accident rates could be as high as 1,000 per month." More recently, see Electric Scooters Are Sweeping the Country. New York Says Not So Fast (NYT, May 29), which yielded the comments below: 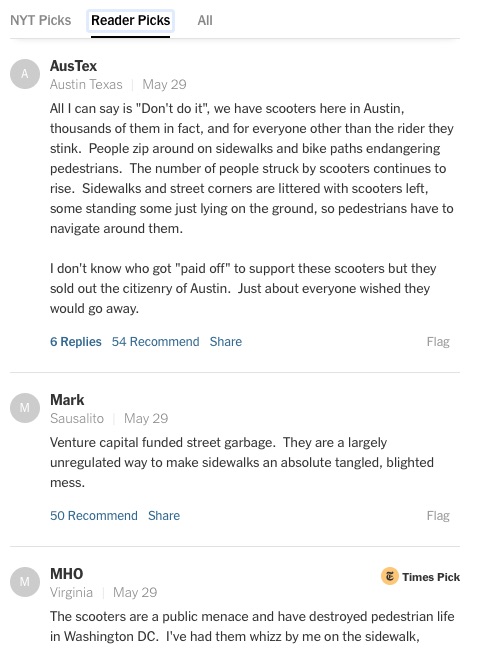 • TikTok: How TikTok Holds Our Attention (Jia Tolentino in the New Yorker, Sep 30 issue, emphasis mine): "I was giving TikTok my attention because it was serving me what would retain my attention, and it could do that because it had been designed to perform algorithmic pyrotechnics that were capable of making a half hour pass before I remembered to look away. We have been inadvertently preparing for this experience for years. On YouTube and Twitter and Instagram, recommendation algorithms have been making us feel individually catered to while bending our selfhood into profitable shapes. TikTok favors whatever will hold people’s eyeballs, and it provides the incentives and the tools for people to copy that content with ease. The platform then adjusts its predilections based on the closed loop of data that it has created. This pattern seems relatively trivial when the underlying material concerns shaving cream and Crocs, but it could determine much of our cultural future. The algorithm gives us whatever pleases us, and we, in turn, give the algorithm whatever pleases it. As the circle tightens, we become less and less able to separate algorithmic interests from our own."

• See also Douglas Rushkoff on the auto-tuning of humanity (Sep 23). Douglas is a past Techtonic guest, from January 28 (and past WFMU host).

• My Tech Pie on Wake & Bake this morning, about CTRL-labs and its "neural interface." See also deletefacebook.com.

• Overview of California's new privacy law - goes into effect in January 2020, thanks to activism by real estate developer Alastair Mactaggart and his team at Californians for Consumer Privacy. More background in this interview (Mozilla's podcast, Aug 29).

• The protests in Hong Kong continue... under a giant billboard of Apple's latest 3-camera surveillance device: