Iberi Choir: Sublime Vocal Polyphony From the Republic of Georgia 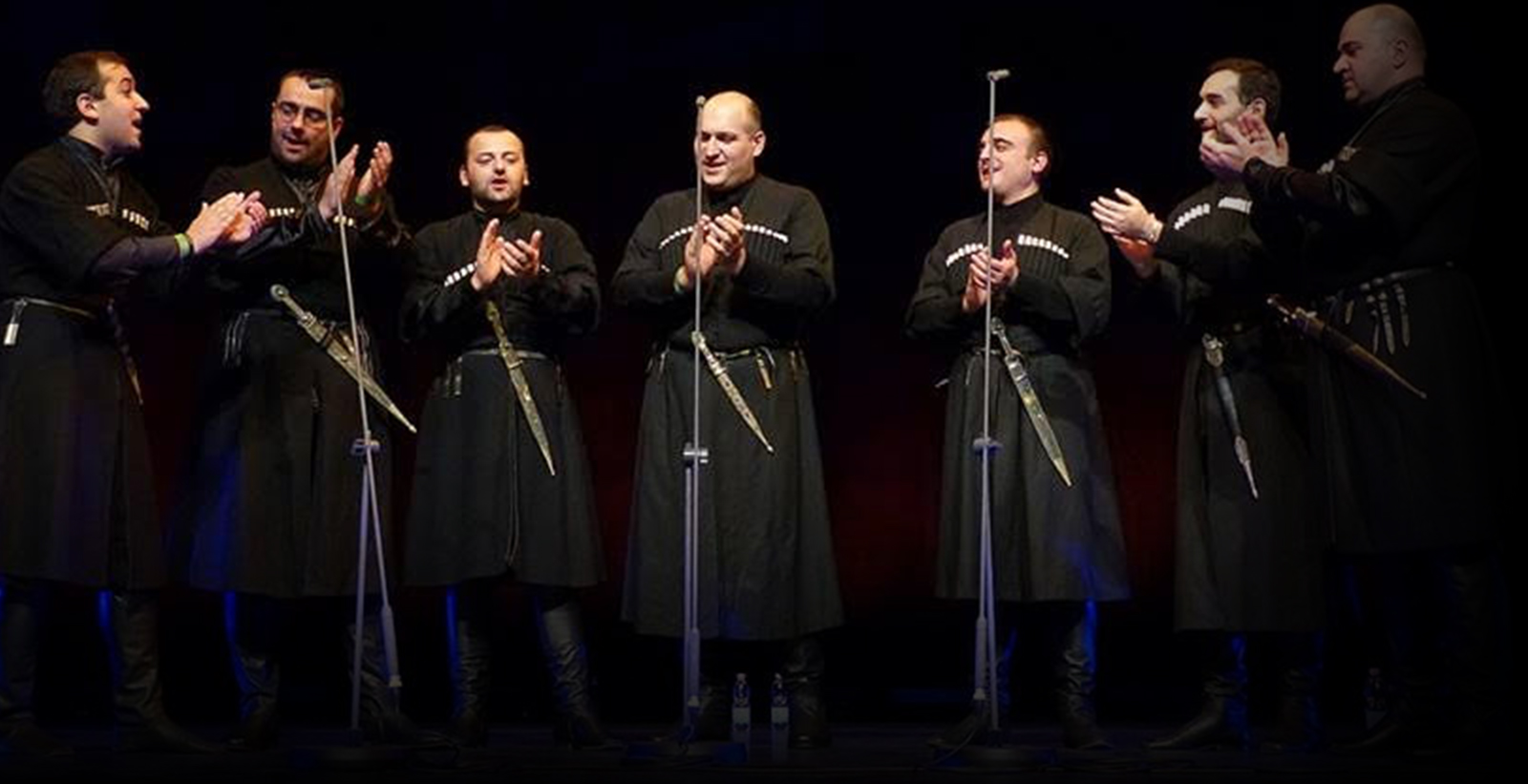 The Republic of Georgia is known for its ancient tradition of vocal polyphony and improvisation. New groups like Iberi - led by a rugby star who gave up the sport to sing - are bringing the tradition into the 21st century.

Iberi sings their way into your hearts on WFMU this Saturday - ahead of an east coast tour including Manhattan shows downtown at Joe's Pub, 425 Lafayette St. Wednesday night April 3rd and a free concert uptown at Our Saviour Lutheran Church, 178 Bennett Avenue (at 189th Street) Sunday afternoon April 7th

In the mountains and along the coasts of Georgia, the ancient country that straddles the Caucasus Mountains, songs have echoed for centuries. Villages and regions developed their own distinctive approaches to melody and harmony, to style and timbre. These songs ring on, finding new life in the rich voices of Iberi. The six-person vocal and instrumental ensemble channels Georgia’s multitude of sounds, exploring the emotional potential of age-old polyphony and traditional instruments. Iberi embrace every aspect of these traditions, including the toasts and feast songs that are intimately entwined with Georgia’s notoriously abundant hospitality, but also the urban folk songs, lullabies, liturgical chants, and historical ballads that still play important roles in everyday moments and grand occasions. The mood varies from dignified and somber to playful and fun, from earthy to otherworldly.

Taking their name from the ancient term of Georgia, Iberia, Iberi started singing together in 2012, at a rehearsal convened by former rugby player and lifelong singer, Bidzina Murgulia. Like the majority of Georgian young people, he had grown up surrounded by singing--”Music is everywhere here”--and gotten hooked. He was inspired to put his own, respectful stamp on centuries-old songs: “I longed for years to start my own choir, to bring my musical vision to life.” He finally decided to set his sports career aside and dedicate himself to a love of music. His collaborators and fellow singers soon became his fast friends, and warmth radiates from the group live.

Murgulia was inspired by Georgian polyphony’s regional diversity and inventive spirit. Though these vocal traditions usually involve three-part harmony, exactly how the voices work together differs wildly from region to region, each bringing out a different breathtaking quality in Iberi’s voices. “Eastern Georgian areas, the main winemaking regions of the country as well as very tiny regions in the nearby mountains, have a more or less similar style of singing. There is a bass drone and two high voices which use melismatic sounds,” explains Murgulia. “In the western part of Georgia, the style is more complicated in terms of harmony. It doesn’t involve a drone, and the bass voice is improvising along with the other two voices. There is also a very special yodeling technique in the Guria and Adjaria regions called krimanchuli, which can be roughly translated as “twisted highest voice.” It’s believed that centuries ago, children used to sing that style to frighten away evil forest creature, but now it’s usually performed by men and often referred to as Georgian Jazz.”

Massive thanks to Juliana Voloz of JV Promotion for bringing Iberi to North America and WFMU, and of course to our illustrious engineer Mark Koch!

The Hykers: I Want a Break Thru

Iberi: Song From Guria Telling the Story of Two Brothers on Opposite Sides During the Ottoman Invasion (Live on WFMU)

(1:14:59 Pop-up)
This song features the unique krimanchuli (yodel-like) vocal technique from Guria and Adjara in Georgia

/ Wind Horse (1:38:40 Pop-up)
GIG / GIVEAWAY: We're giving away two pairs of tickets to see Anda Union a week from tonight at Merkin Hall. To get in the running for a pair of tickets to this show OR our other giveaway tonight Email me, Rob W, here, please specify first and if possible second choice among the two concerts available, and please put the word "TIX" in the subject line. The deadline to enter is tonight at midnight; winners will be notified by Monday.

/ La Patronal (1:44:04 Pop-up)
GIG / GIVEAWAY: We're giving away one pair of tickets to see La Patronal on Tuesday night at Drom. To get in the running for a pair of tickets to this show OR our other giveaway tonight Email me, Rob W, here, please specify first and if possible second choice among the two concerts available, and please put the word "TIX" in the subject line. The deadline to enter is tonight at midnight; winners will be notified by Monday.