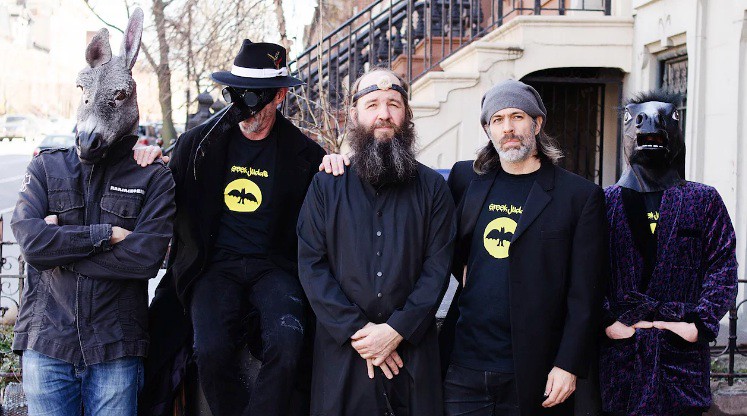 But there's more: Greek Judas doesn't just play regular old psychedelic rock (not that there's anything wrong with that). Greek Judas plugs in and amps up rebetika, the anguished music of 1920s and 30s urban Greek lowlife, and takes it to another dimension.

The band's self-titled four song EP was released on December 1, in advance of the forthcoming debut album:
https://greekjudas.bandcamp.com/album/greek- judas

And you can catch them live soon: Greek Judas is playing Brooklyn's underworldly Hank's Saloon Thursday December 14th. The band will also be playing the famed Golden Fest at Grand Prospect Hall in Brooklyn in January.

Massive thanks to our illustrious engineers Manny Yupa and Glenn Luttman!

To get in the running for a pair of tickets to see Anewal, Thursday December 7th at 7:30 pm at Rockwood Music Hall Stage 2, in a show produced by the World Music Institute as part of their ongoing series of concerts presenting music from around the world, around New York: Email me, Rob W, here, and please put the word "TIX" in the subject line. (One pair of tickets available.) Winner will be notified by Monday.

About Anewal (from the World Music Institute event page):

Anewal is the new trio of Alhousseini Anivolla, former lead guitarist and singer of the famous desert blues band Etran Finatawa from Niger, which brings together traditional African songs of the Tamashek people of the Saharan desert in a new soundscape. With Anewal, Alhousseini continues his mission as an ambassador for cultural diversity in a changing world. Anewal uses hypnotic two-chord jams, trance inducing beats, biting blues-infused guitar with Alhousseini’s warm vocals sung in his local vernacular. He’s an incisive and remarkably subtle guitarist, varying his attack on the strings, adding minute levels of natural distortion, with his incisive, blues-infused phrasing.

Sandy Denny: I Wish I Was a Fool (For Shame For Doing Wrong)

/ Anewal / The Walking Man / Riverboat (0:32:30 Pop‑up)
GIG / GIVEAWAY - enter the drawing to win a pair of tix to see Alhousseini Anivolla and Anewal Thursday night Dec 7 @ Rockwood Music Hall - email Rob W via the link on this page (put "TIX" in the subject line) to enter.

Greek Judas : Why I Smoke Cocaine (Live on WFMU)

Greek Judas: I'm On My Way (Live on WFMU)