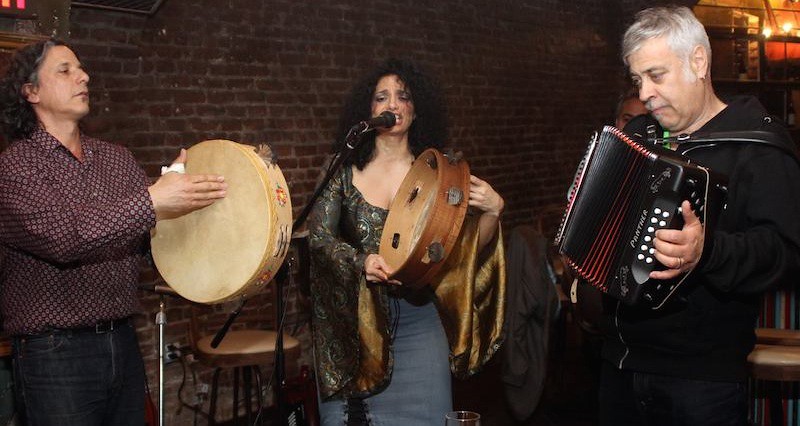 Michela Musolino explores her Sicilian roots as a solo artist and with two bands, Rosa Tatuata and Terre Sangue Mare (who just released an excellent self-titled debut album). She'll introduce her music and also turn us on to some of the great sounds coming out of Sicily, home of a vibrant folk revival scene.

(0:55:54 Pop‑up)
Fishmonger’s song/ traditional banniari from Palma di Montechiaro, Agrigento, from the research of Aldo Bennici, used by Luciano Berio in his Voci.

(0:58:07 Pop‑up)
An adorable 'single stanza’ (same stanza structure is repeated throughout) song for voice and organetto. It’s a song to make the time pass during work.

(1:08:47 Pop‑up)
a Sicilian lullaby - a haunting mixture of folk revival and world music

(1:15:09 Pop‑up)
tells the story of a forbidden love between a muleteer and the emir’s daughter. Schimmenti is a folk singer/songwriter who is also an activist and a bit of a living musical legend in Sicily.

(1:22:34 Pop‑up)
a modern ballad dedicated to Rita Atria, a young girl who was a noted anti-mafia activist. The song was written and arranged by Schimmenti and it is performed by this group of young musicians. They perform a a lot of Schimmenti’s work. It's an example of how folk music in Sicily is continuing into the next generation because of a concerted effort by the older, more established musicians to actively work with the younger generations.

(1:28:25 Pop‑up)
Rosa Balestreri and her voice represent Sicily. She was seminal in calling attention to Sicilian folk ; one of the first to become known throughout Italy and the world for it. The text is a poem by one of Sicily’s greater modern poets, Ignazio Buttita. Buttita’s works often become folk songs and the Buttita Association closely works with music artists to foster this connection.

(1:41:32 Pop‑up)
a traditional song about desire sung by Muzzi Loffredo, modern, ( a bit avant guard, but not too…this is really about the voice) arranged by Vanuccio Zannella. Muzzy takes a traditional song , which is usually sung wistfully, and with her voice strips it down to the raw emotion of longing.

(1:47:07 Pop‑up)
Pino Veneziano - a Sicilian singer/songwriter who first picked up a guitar at the age of 40. His songs become the voice of a people. Sicilian singers around the world sing his timeless songs. This is a song about the struggle to enjoy what one has worked for and to not be controlled. Veneziano was influenced by tradition. The first few bars of this original song are the noted form a Sicilian called answer song. Veneziano has been a great influence on me.

(1:52:49 Pop‑up)
written as a prayer by a man who is ready to give up, but he asks for strength so he an give his children a future. This showcases the frame drum. Although it’s a tradition in Sicilian folk music, Artists like LaGuardia ( and Michele Piccione) have taken the simple instrument and elevated it to incredible heights artistically.